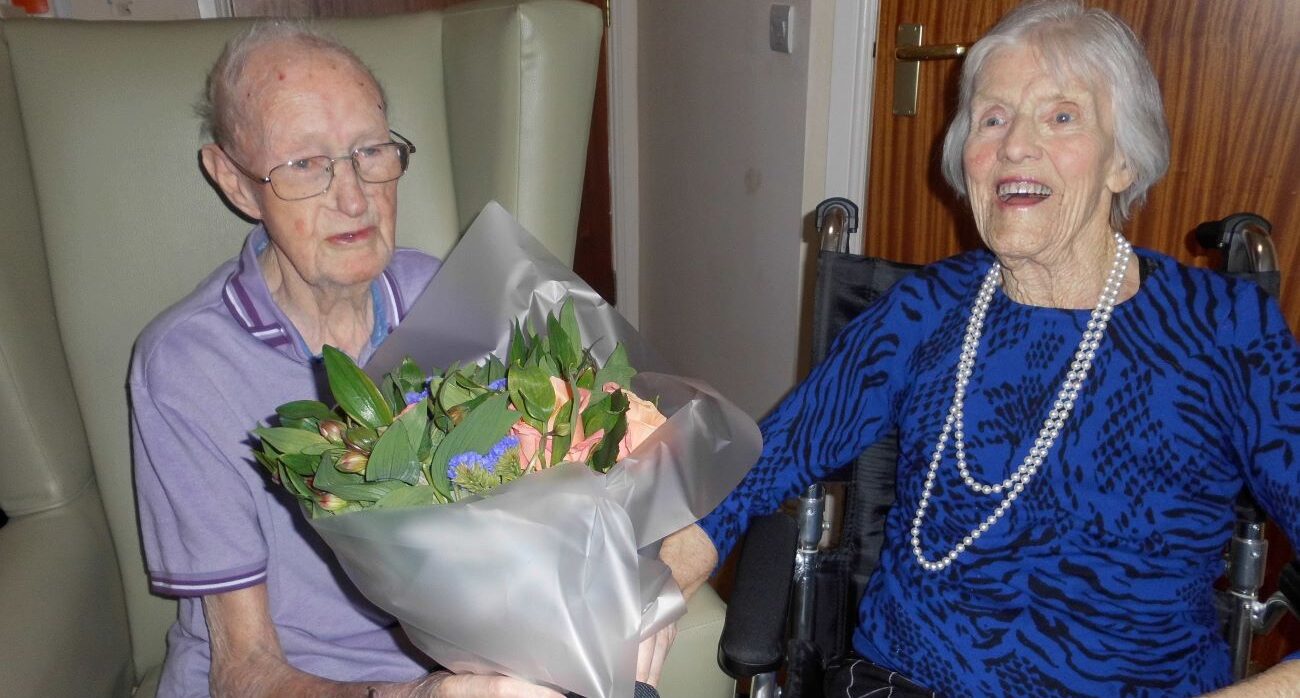 The Kerr’s, who live in the Tower Unit at Hill View Care Home on Singer Road in Clydebank, received warm congratulations from Her Majesty the Queen, as well as cards and presents from their family.

The couple, known as Jimmy and Cissy, were sadly unable to enjoy the festivities that their three children – Jim, Elizabeth and Rosemary, nine grandchildren and great-grandchildren had been planning for them, due to the restrictions on visiting care homes.

So, Tower Unit Colleagues stepped in to help them celebrate the huge milestone, 70 years after they got married in 1950.

Their youngest daughter Rosemary said the family were grateful for the special effort.

Rosemary said: “We were heartbroken that we couldn’t throw the party we’d planned, but Tower Unit Colleagues are wonderful – they made sure Mum and Dad had a happy day.

“The Colleagues there just love them. One carer told me that when Mum is in the dayroom and Dad walks in to join her in the morning, her face lights up like she’s 21 again. It’s a deep-rooted, true love and the carer told me their devotion for each other makes her and the staff want to cry!”

Cissy, 92, fell ill in early December 2019 and was taken to the Vale of Leven Hospital. Jimmy, 98, was taken ill just a day later and was moved into the ward alongside his wife so they could be cared for together. After recovering sufficiently, the Kerr’s – who are both living with dementia – moved into Advinia’s Hill View on 30th December.

Home Manager Kathleen Glasgow said the couple are a joy to look after.

Kathleen said: “It was our privilege to help Jimmy and Cissy celebrate their anniversary, what an achievement.

“I know how much it meant to them and their family to mark the day, so we made a big fuss of them. When this is all over, we’ll help Rosemary and the family give them the party they’d been planning all along.

“Jimmy and Cissy are a shining example of how to have a long and happy marriage, and we’re delighted they’ve started a new chapter of their story with us at Hill View.”