Residents and Colleagues joined forces to create the moving display that adorned the Park Road entrance of the Home with the traditional red flowers, silhouettes of the unknown soldier, spitfires and pets at war.

The stunning creation caught the attention of the local media, with Team Parklands Court being hailed for the emotional impact of their tribute.

Beth Lang from NAPA said that the competition was fierce, but Parklands Court’s entry was the stand-out winner.

Beth said: “We were blown away by the number and quality of entries, but [Parklands Court’s] stood out. Thank you for your amazing contribution.”

Each year, the Parklands Court Activity Team work hard to give Residents the chance to mark Remembrance Day in their unique way.

The hand-crafted poppies, moving poems and wartime silhouettes were put up all over the Home. There was also a beautiful poppy made out of painted rocks in the garden, plus the Residents had the chance to reminisce about their wartime experiences and sang the songs of forces sweetheart Vera Lynn.

Ellie said: “This is a fantastic achievement by our Residents and Colleagues at Parklands Court – the display was magnificent.

“Each unit had its own theme – including spitfires, D Day, VE Day and pets who served in the war. The display was all hand-crafted and came from the heart.

“I’m delighted that they’ve won this great competition. It’s wonderful to give the local community a beautiful display that provoked a moment’s pause to think about our fallen heroes.”

The competition prize is a poppy bird table, which will be put in the grounds of the Home, where Residents enjoy relaxing in good weather. 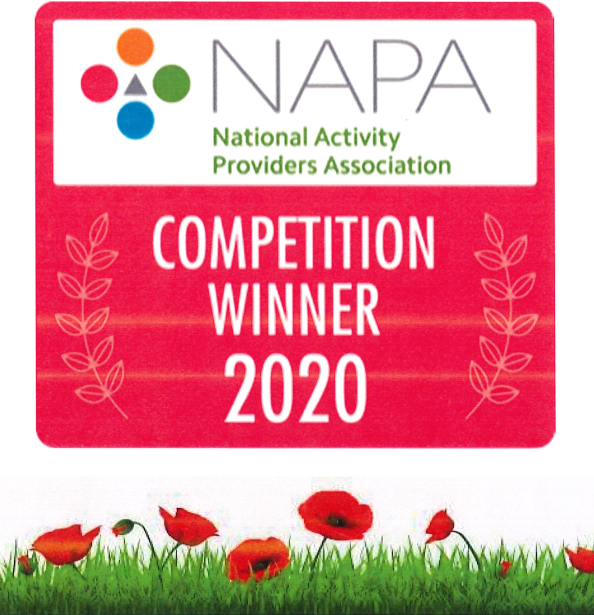